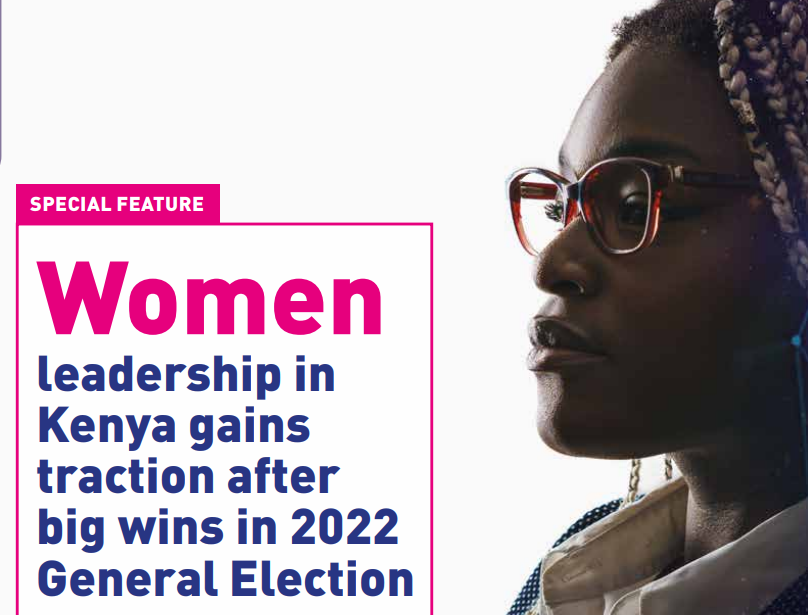 For long, Kenyan women have been waiting for the day they will have opportunities to take up positions initially dominated by men.

With the 2022 General Election, Kenyans’ perception of women leaders seems to have changed; this is evident from the number of women governors, senators and Members of the National Assembly who were elected in the August 9 polls.

This is a small, but significant improvement from the 2017 polls, when three women were elected as governors namely: late Joyce Laboso for Bomet county, Ms. Anne Waiguru for Kirinyaga County and Ms. Charity Ngilu for Kitui County.

There’s a likelihood of another push to pass the two-thirds gender bill which has been trailed for quite a long time.

Further, former LSK president Nelson Havi had promised to push for the implementation of the two-third gender rule once he assumed the Westlands constituency office which he was eyeing in the just concluded election. Unfortunately, he lost the seat to the incumbent, Tim Wanyonyi.

A section of Kenyans, especially men, have been fighting against this move arguing that women should immerse themselves into power searching just as the politicians do.

In the just-concluded General Election, seven women outshone their male rivals for their counties’ top positions.

The county, which has eight constituencies, elected five women MPs.

Nakuru County elected Susan Kihika as their governor on a UDA ticket while  Anne Waiguru was re-elected as the Kirinyaga Governor on the same ticket, with Cecily Mbarire becoming the new governor for Embu on a UDA ticket.

Kawira Mwangaza ran as an independent candidate and broke the record by winning the governor’s race with 209,148 votes. She defeated Meru Senator Mithika Linturi, who got 183,859 votes, and incumbent Kiraitu Murungi who got 110,814 votes.

Wavinya Ndeti was elected as the first female Machakos governor after unsuccessfully contesting for the position two times.

A lobby group expressed high hopes of achieving the two-thirds gender rule in the next Parliament.

The Center for Rights Education and Awareness said in a press statement on Monday that this election has seen an increase in women elected to various positions.

“We are seeing more women in gubernatorial, senatorial and parliamentary roles as compared to previous years.

“We remain optimistic that the next administration and Parliament will put in place measures to realize the two-thirds gender rule in all elective and appointive positions of leadership,” they said.

According to Mzalendo Watch,76 women Members of Parliament stood elected as of August 13, pending results from three counties.

“The number is split between the Senate and the National Assembly, 29 MPs, 44 confirmed woman representatives and three senators,” Mzalendo said.

With three more-women representatives, Parliament will have more than 70 women leaders.

Due to the affirmative action, a number of women have held elective seats as woman reps since the promulgation of the 2010 Constitution.

The Kenyan Constitution in Articles 26 (6), 27 (8) and 81 (b) provides for affirmative action aimed at reducing gender imbalances in leadership positions by providing that no more than two-thirds of the members in any elective or appointive positions shall be of the same gender.

This trend gives hope to a majority of women leaders who have been passionate about joining political positions, but shied off due to the negative energy they got from the public in the past. Women, according to the past African culture, were viewed as homemakers and were not allowed to lead, not even at their homes. But this perception is changing and women are embracing it.