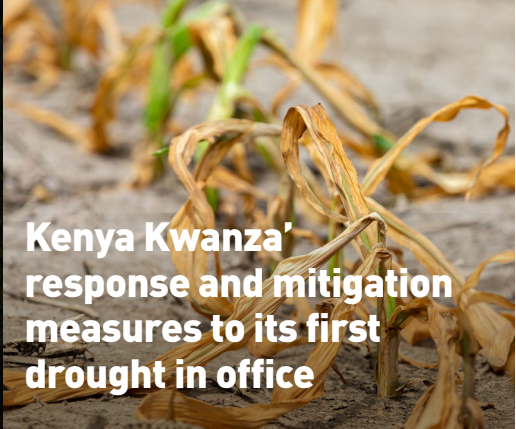 Due to the impact of climate change, consecutive rain seasons have failed hence the drought in most parts of the country. This has seen many Kenyans especially in the ASAL (Arid and Semi Arid Lands) communities lack food and water.

Videos of children and adults from the drought-stricken areas have been circulating in mainstream media and social media platforms in the past months showing a dire situation. Almost four million Kenyans have been affected by the drought in the country .

The government and well-wishers have been sending food relief to the most affected areas of the country even though the relief is not enough to sustain the hungry population for long. The government and stakeholders have a task at hand to mitigate the drought and prevent deaths even if it means making short-term measures as they work on the long- term ones.

There is urgent need for drought mitigation, preparedness and response measures. This has been a challenge especially to the Kenya Kwanza government which has been in office for less than 60 days.

The Kenya Red Cross took to its social media platform in a statement and called for collective action in the fight against the drought.

“4.35 million people in Kenya affected by drought are on the brink of starvation. They need water, food and medical attention.  We are responding to these needs but we still need collective action. Join our cause in helping our brothers and sisters facing the food crisis,” the statement read.

While presiding over the launch of the Kenya Youth Employment and Entrepreneurship Accelerator Program (K-YEEAP) which was organised by the Kenya Private Sector Alliance (KEPSA) on Monday, Deputy President Rigathi Gachagua expressed the government’s concern over the drought menace terming it a national crisis.

In his statement, Mr Gachagua urged the private sector to come to the aid of the government in raising funds for the drought mitigation strategy.

“We urge our donor friends to be active and see what they can do for the people of this country and for humanity as well,” DP Gachagua said.

Earlier last month, the DP met with 32 county commissioners from the drought-stricken counties over the drought mitigation measures. He noted that the government had come up with a way of solving the drought menace.

“We have developed and agreed on a clear road map on how to mitigate the effects of the drought and make sure no Kenyan dies from hunger,” Mr Gachagua said in a statement.

Further, he added that the government had come up with some measures to assist in plans for drought mitigation and response.

“We have agreed on the formation of county coordinating teams to be co-chaired by governors and county commissioners as the focal point of driving the humanitarian intervention,” the DP said.

Some of the measures that the government has resolved to undertake to help curb deaths and starvation include construction of dams and water reservoirs.

For instance, on Saturday, October 30, President William Ruto promised to construct 100 mega dams to prevent drought that is occasioned by insufficient rainfall in the country.

“We will be moving a bit fast now and we have a public-private instrument that will support our dam-building efforts and water harvesting programme,” President Ruto said in a statement.

Further, he added that the NG-CDF Act will be reviewed to enable it to accommodate tree-planting activities to conserve the environment. The President said more funds will be injected into the kitty to enable it to support women and youth groups that will establish tree nurseries at the grassroots.

Mega dams would be effective in storing water in large volumes which would in return be used in dry seasons that would be experienced in future. This water can be used for farming hence enough food to sustain the large population.

Tree planting has been one of the best strategies that has been encouraged for ages. The Kenya Kwanza government has stepped up and is ready to keep up this pace by encouraging more trees to be planted.

In a statement, President Ruto urged youth especially those who have previously worked in the Kazi Mtaani programme to be engaged in planting of trees. He noted that the move would help the country in fighting drought occasioned by climate change.

“We currently have a bad drought and it will only get worse due to climate change. Unless we change the environment, climate change is a reality that we must live with,” the President added.

Agroforestry is one of the best mitigation strategies that can help prevent drought.

According to Improving Capacity in Forest Resources Assessment in Kenya (ICRAF-K), agroforestry is the incorporation of trees into farming systems. It has enormous potential to mitigate the effects of drought, prevent desertification and restore degraded soils.

Agroforestry can also help boost food production and provide alternative sources of nutrition or income when crop yields are low.

Further, with climate change expected to lead to unpredictable seasons in the future, placing even greater pressure on agricultural systems, food production and food prices, agroforestry is a viable option to help buffer farmers against the impacts.