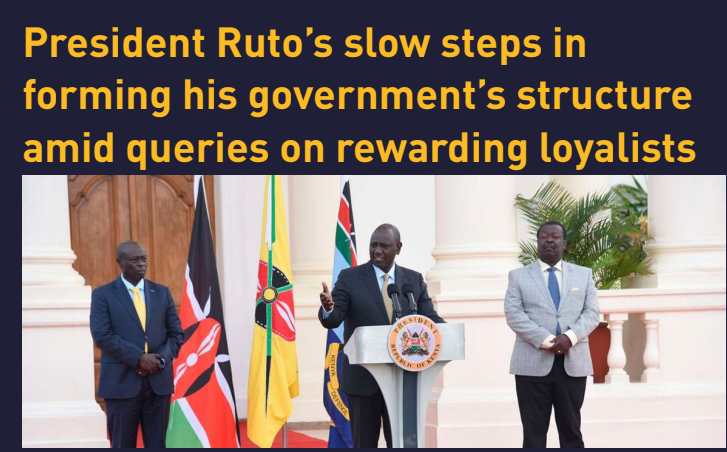 There has been a delay in coming up with President Ruto’s government structure which has led to delayed service delivery.

The President named his Cabinet’s nominees awaiting vetting by the National Assembly which has already formed the House Business Committee and the Committee on Appointment and is expected to commence vetting next week.

His administration will have 49 state departments and 22 Cabinet Secretaries.

The President has also gone ahead and created a position in his government structure which is the Chief Minister which he gave to Musalia Mudavadi.

A section of lobbies and Kenyans have raised questions regarding these new positions that have been created. Some say that they are aimed at gifting the President’s loyalists.

Some of the nominees for the CS posts are in question over graft queries. Interestingly, the Office of the Director of Public Prosecutions (DPP) dropped some of the cases. This prompted the Law Society of Kenya to question the motive behind the withdrawal of graft cases against former Malindi MP Aisha Jumwa and former Kenya Power MD Ben Chumo as well as that of former Meru Senator Mithika Linturi.

“If the cases are being withdrawn for lack of evidence to sustain the charges, the DPP must take responsibility and explain how the decision to charge was arrived at in the first instance,” LSK chairman Eric Theuri said on Thursday.

On Tuesday, the Ethics and Anti-Corruption Commission said it was compiling reports on the suitability of each of the nominees to block those with questionable integrity.

A section of Kenyans have debated against the CAS posts which were created during President Kenyatta’s tenure and which President Ruto upholds in his government.

Thirdway Alliance Party leader Ekuru Aukot questioned President William Ruto’s intention to retain the CAS position. In a statement, he claimed that the positions were meant for the President’s allies as ‘political rewards’.

“It’s obvious out here that the CAS positions are a political reward to your friends. If so, how do you intend to reward the 7.2 million Kenyans who voted for you? Not every Kenyan can get a job in government,” Dr Aukot said.

Further, he urged President Ruto to form a lean government that would work for all the 50 million Kenyans and avoid rewarding his allies with government jobs.

“By having a lean government for all 50 million Kenyans, that is also the reward you can give the 7.2 million who voted for you,” he said.

LSK argues in its petition that lack of clarity on the intended office of the CAS denies the public the opportunity to make comments on the possibility of the duplicity of roles between the Principal Secretary and the CAS.

LSK noted that any duplicity would lead to the wastage of public funds.

Normally, the Government structure is composed of the Executive, the Legislature, the Judiciary and the devolved governments.

The Executive comprises the President, the Deputy President and the Cabinet, while the legislature consists of the upper house (Senate) and the lower house (National Assembly).

The last 30 days have seen the President working on spearheading implementation. On Thursday for instance, he reorganised the government, placing budget policy and economic affairs under his wing at the State House in his first official act to reflect his vision for the next five years.

He has also created three new offices to steer his plan under his direct control and supervision.

2.       The Office of Economic Transformation.

He also reorganized the office of the Head of Public Service, combining it with that of Chief of Staff as had been the case under President Kenyatta’s first term before he separated them.

Even though the process of reorganising the structure of President Ruto’s administration is taking longer than expected, it is aimed at ensuring that he is able to counter any eventualities as well as ensure efficiency in service delivery as he promised Kenyans in his manifestos. With the current hike in prices of basic commodities which have seen Kenyans starve especially those in drought-stricken areas, the President has the task of ensuring that their well being is taken care of so that no lives are lost in the country.