President Ruto bags a host of trade and energy deals 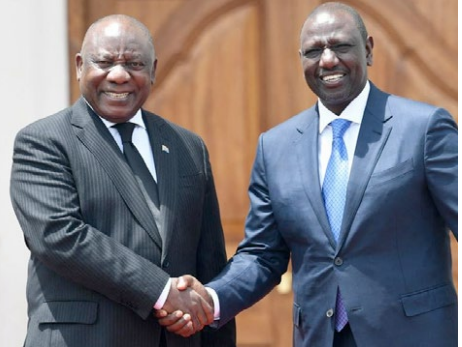 As Kenya spearheads efforts for the continent to join the African Continental Free Trade Area (AfCTFA), President William Ruto’s government has established the tone for economic diplomacy on the regional and continental fronts.

In addition to four other agreements that would address non-tariff barriers like licensing bureaucracy, regulation restrictions, and sanctions, the latest diplomatic victory for Kenya is the abolishment of visa requirements for Kenyans traveling to South Africa for three months or less.

This opens up the two countries for business in sectors such as industries, agricultural produce export, and logistics. Kenya, which had a Sh40.1 billion trade imbalance in 2021, stands to gain from the pact, as well as private businesses and investors that have their sights set on expanding there.

President Ruto and Ethiopia’s Prime Minister Abiy discussed a deal on importation of wheat from Ethiopia whose yields have significantly increased. This was during President Ruto’s visit to Addis Ababa. This is meant to help in stabilizing food costs in Kenya in light of the recent rise in the price of food products.

Kenya and Ethiopia committed to cooperate to fully realize the economic potential between them. President Ruto stated that the Kenya-Ethiopia alliance is a cornerstone of mutual benefit and regional stability and expressed his hopes on the wonderful practice of neighborly synergy that is set to endure and grow.

The ministries of trade in Kenya and Tanzania have had discussions on smooth trade on the borders. The discussions revolved around fostering trade links and unification along the borders of the two nations. The two leaders agreed to promote commerce and unification along the two borders. They further reaffirmed their dedication to strengthening ties in a variety of areas, including business, travel, security, and communication.

The two countries committed to fostering positive relations that will promote and expand tourism. This shall be by removing the obstacles that prevent smooth tourism operations and further enhance the East Africa One Area network so that the East African countries can collaborate and converse more. This will enable the countries to share information and develop a strategy to defend the borders hence strengthening collaboration between Kenyan and Tanzanian security organizations.  This will help in combating transnational crimes like human trafficking, terrorism, and other activities that harm the reputation and render the East Africa region uncompetitive. In order to monitor and complete the accord, Kenya and Tanzania decided to hold the fourth joint commission before the year ends.

Another big move by Kenya is during the COP27 climate summit in Sharm el-Sheik, Egypt, where President William Ruto met with UK Prime Minister Rishi Sunak who praised Dr. Ruto’s pioneering climate leadership and urged Kenya to keep following the green prosperity road. The two agreed to expedite British investment projects worth Sh500 billion that will assist Kenya’s leadership on climate change. The agreement covers initiatives in agriculture, transportation, and green energy. These fresh, eco-friendly investments will serve as the centerpieces of the ambitious five-year UK-Kenya Strategic Partnership, which will be advantageous to both the UK and Kenya.

The projects covered by the agreement include the construction of the Grand High Falls Dam, which would cost Sh425 billion, as well as new geothermal and solar energy production in Menengai and Malindi. The latter will produce a gigawatt of renewable power and give irrigation solutions to a region more than twice the size of the Maasai Mara to counteract the effects of drought. Others include a green redevelopment of Nairobi built around a brand-new central train station and a Sh32 billion investment in a Lake Victoria region climate-resilient agribusiness hub.

Further, the UK government will provide Sh2 billion to a new guarantee firm that, in partnership with CPF Financial Services and other private investors, would minimize investment risk and open up Sh12 billion in climate funding for Kenyan projects over the next three years.

As the President ramps ups efforts to ensure farmers have supply of the input, struck a deal with a multinational to develop a fertiliser plant. The agreement was signed with Fortescue Future Industries (FFI), an Australian business with a portfolio of green hydrogen and renewable energy projects, during the COP27 conference. FFI and the Kenyan government committed to work together for three years to establish a 300MW green ammonia and green fertilizer facility. This agreement will solidify the promise to expedite considerable investment in the development of green industrial facilities in Naivasha, Mombasa, and Lamu, resulting in the creation of thousands of new employment and a significant increase in Kenya’s manufacturing and industrial development.

The President has been all hands on deck since he was sworn in. The several deals bagged are all welcome ideas that are going to promote Kenya Kwanza’s goals of lowering living expenses, ending hunger, creating jobs, broadening the tax base, improving the foreign exchange situation, and promoting inclusive growth. These are positive steps towards fostering economic development of the country.