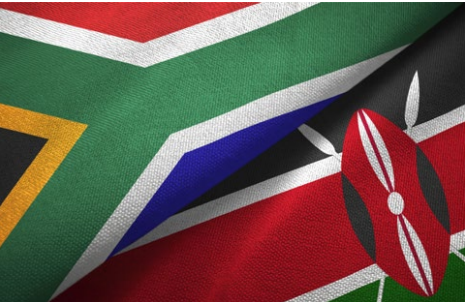 The Declaration of Intent was further strengthened on 2 October, 2007, by both parties upon signing of the Agreement for the Establishment of a Joint Commission of Cooperation (JCC). It was agreed that the JCC would be held biennially whereas senior officials’ meeting would be held annually to conduct a mid-term review of agreed areas of cooperation.

It was during this establishment of the JCC that the late President Mwai Kibaki extended a state-visit invitation to President Zuma becoming the first South African president to make a state-visit to Kenya.

The two parties also agreed on a Strategic Partnership Framework between South African Airways SOC and Kenya Airways PLC which would lead to the creation of a Pan Africa Airline Group.

South Africa’s President Cyril Ramaphosa this week paid Kenya a two-day state-visit where he was hosted by President William Ruto. The two Heads of State led a high-level delegation in a series of meetings aimed at reviewing bilateral relations between the two countries and progress evaluation of agreed areas of cooperation.

Trade relations between the two countries as of last year had averaged over 580 million US dollars and which was largely in favor of South Africa. During the recent state-visit by President Ramaphosa, a meeting between the Ministers of Trade from both countries discussed sustainable ways of balancing trade between the two countries. In addition, it was agreed that the ministers would identify sustainable mechanisms of limiting non-tariff barriers towards the realization of smooth strengthened trade and investment between the parties.

Service barriers are part of non-tariff barriers which include matters concerning visas. During the State-visit of former President Kenyatta to South Africa, President Ramaphosa undertook to establish a presidential task force to address any visa related challenges and report back after six months. Easing of travel restrictions between the two countries is integral in strengthening trade, investment, tourism and cultural ties. President Ramaphosa’s announced that beginning January 2023, Kenya ordinary passport holders will be allowed to enter South Africa visa-free for up to 90 days per calendar year. The two leaders agreed to revert on this policy in the circumstances of breach of immigration laws and regulations of either country.

The other non-tariff barrier sought to be removed between the two countries is the ban against meat, avocadoes, pineapples and tea imports to South Africa for failure to meet South Africa’s phytosanitary regulations requirements. President Ruto stated that plans are underway to harmonize phytosanitary regulations between the two countries to allow for imports and access of Kenyan produce to the South African markets. Kenya is the leading exporter of meat, lifting of the restrictions will expand the meat export market and scale up meat production.

President Ruto’s administration is critical on housing and settlement as such one of the MOU signed during President Ramaphosa’s visit was on cooperation in the fields of housing and human settlement. South Africa has indicated signs of recovery and increased activity in the housing construction following the recovery from the Covid-19 effects.

Kenya will benefit from this MOU by learning implementation lessons from South Africa which has made tremendous strides in addressing the issue of housing and human settlements. For instance, South Africa’s 2022/23 budget for the National Department of Human Settlements which serves as the primary means for government to achieve its goal of integrated, sustainable human settlements has seen a 7% increase to the Human Settlements Development Grant (HSDG) and a slight drop in the Urban Settlements Development Grant (USDG) to R7.35 billion.

The South Africa’s national department transfers the majority of its budget to municipalities and provinces as implementing agencies, this will be key for the Kenya national government working in tandem with the county governments in making progress under the housing program.

The other two MOUs are on cooperation in the fields of correctional services, and cooperation between Kenya School of Government and the National School of Government in South Africa. The two parties also signed an agreement on audio-visual co-production. Particularly, Kenya is set to benefit from the agreement on audio-visual co-production as capacity building and support from the State in the creative economy is a key pillar in President Ruto’s administration.

The agreement will offer incentives and necessary support to the creative industry players to scale up cultural production and the creative economy.

The MOUs set in place are a good sign of strengthening economic and cultural ties for the two parties, particularly for Kenya, implementation of the MOUs will balance the scales of trade and strengthen trade and investments.