The next race for the BBI 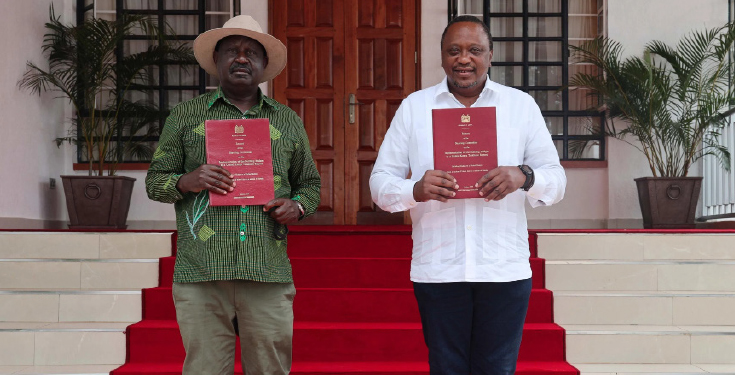 Before the final report of the Building Bridges Initiative was received and made public, it looked like there was going to be a clear divide between the pro-Handshake and the camp of Deputy President William Ruto.

Since it became public and the subject of debate, it is not as clear as it was since the teams supporting the DP have spoken out on sections of the report and recommended changes to the laws and said nothing about support overall.

On Thursday evening, for example, the DP used Twitter to have a go at former Prime Minister Raila Odinga, BBI proponent and the man who would be his strongest competitor if he is on the ballot in 2022.

“The makanga, wheelbarrow, mkokoteni, mama mboga & bodaboda guys are FINALLY at the centre of our CONVERSATION,” he said, with a clip taken from televised speech by Mr Odinga where he was talking about the recommendations that would improve the lives of low-income workers. “With EMPOWERMENT all of them can be like Mr. Hilton a shoeshiner who finally owned Hilton hotels. Welcome Tinga to the Hustler movement. Mahustler Tibim,” he said sarcastically.

Kipchumba Murkomen, a member of the Deputy President’s inner circle, has framed the debate around the Bill and the possible referendum as an attempt to cut down the lead Mr Ruto assumes he has in the race for the presidency.

He has dwelt on the positives for the politicians and concluded that it is the people that stand to lose from the implementation of the report but intentionally avoids the point of the whole process – peaceful political transitions.

The reactions of the DP Ruto team – the Tangatanga team – are good for the implementation of the report’s recommendations as they suggest that there are opportunities for compromise. They also suggest that the DP’s team does not have moral convictions so strong that they could decide to create an unwelcome ruckus as the implementation gets underway.

With the BBI, though, it will be important to understand the complexities of implementation as, contrary to popular belief, there will not simply be a BBI Bill for Parliament to consider.

Changes to the Constitution via Parliament mean that there must be consensus before the Bill is published, as it cannot be amended as it goes through the legislative pipeline. Its proponents must be prepared for the 180 days – six months – there are between the first and the second and the second and the third readings of a Bill to amend the Constitution. There would also be the likelihood that the Bill would have to be scrutinized by the Senate as well, which means there would be a year spent just waiting between the readings. It would also need the backing of at least two-thirds of the members of each House at every stage, which would mean that party and caucus whips work overtime.

For the other side of implementation, there would also be regulations to effect the minor changes, and an omnibus Bill or a set of Bills to give legal effect to the raft of recommendations that the BBI team made.

The upshot of all this is that there is still a long way to go, and even if the proponents of the report were to have all the backing they need and have the various regulations and Bills published by next Monday, there is a lot of work that needs to be done.

When the dust settles, the question that will remain unanswered is whether all that needs to be done can be done by the date of the next General Election – August 2022.