FTA Series – Part 6 : Kenya concludes its negotiations with the UK 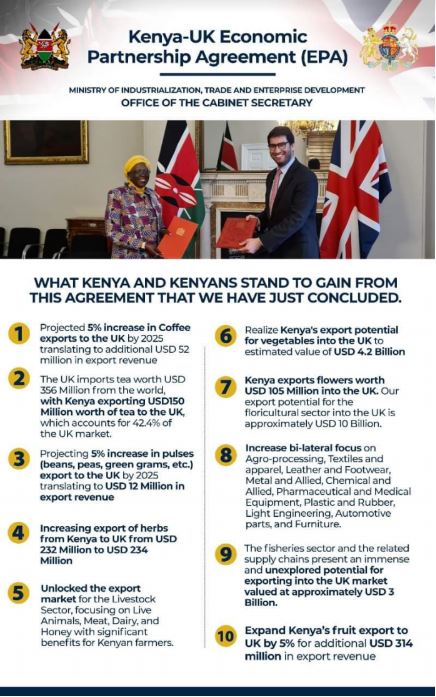 With the United Kingdom (UK) set to conclude its exit from the European Union (EU) at the end of December, 2020 it has decided to enter into a bilateral agreement with Kenya. On Tuesday 08th December, 2020, the two countries formally signed a trade agreement ending an era of doing business through protocols of the European Union. The questions on everybody’s mind are (1) what does this mean for the two countries? (2) what impact will this have (if any) on the other bilateral trade agreements being negotiated, particularly the US-KE FTA? (3) what impact will it have on regional trade particularly East African integration and the AfCFTA?

Overall, this move has been touted as generally beneficial not only to Kenya but to the region as a whole. With reference to Kenya, the trade agreement is expected to support job creation and economic development especially in the agriculture sector which is estimated to contribute 26 percent of the country’s GDP and another 27 percent of GDP indirectly through linkages to other sectors.

It is envisaged that the preferential trade deal with the UK will pave the way for a long-term partnership that will shield the EAC exports from high tariffs that would apply under the Most-Favoured-Nation (MFN) rules. This is premised on the concluded economic partnership agreement based on the stalled EU-EAC EPA text ratified in Kenya in 2016. This will guarantee predictable market access for exports originating from the EAC Customs Union. As such it is expected that this will lead to a deepened EAC integration by ensuring that exports from the EAC countries continue to enjoy duty and quota free access to the UK and the EU markets.

“Moreover, the agreement will enhance privileges for agricultural goods and confer originating status to EAC exports, including Kenya’s key flowers and fresh produce, even if they pass through any of the 27 EU countries.”- CS Betty Maina, CBS.

It will also benefit many of the approximately 2,500 UK businesses exporting goods to Kenya each year, including many UK suppliers of machinery, electronics and technical equipment, where continued tariff-free access will be guaranteed.

However, there are those that do not agree with this analysis and have infact stated that the unilateral deal between Kenya and the UK would undermine the EAC Customs Union (CU). This position is informed by concerns that such would undermine the integrity of the CU and more time was needed to prepare and undertake joint negotiations.

There are also genuine concerns over how this may adversely impact (if at all) the implementation of the AfCFTA. According to Gerhard Erasmus, founder of Tralac, “African Regional Economic Communities (RECs) may face difficult choices about rules-based trade and regional integration in the times ahead. If the relevant rules are not respected, regional trade arrangements will become uncertain and unpredictable. They may even unravel, as happened previously in East Africa.”