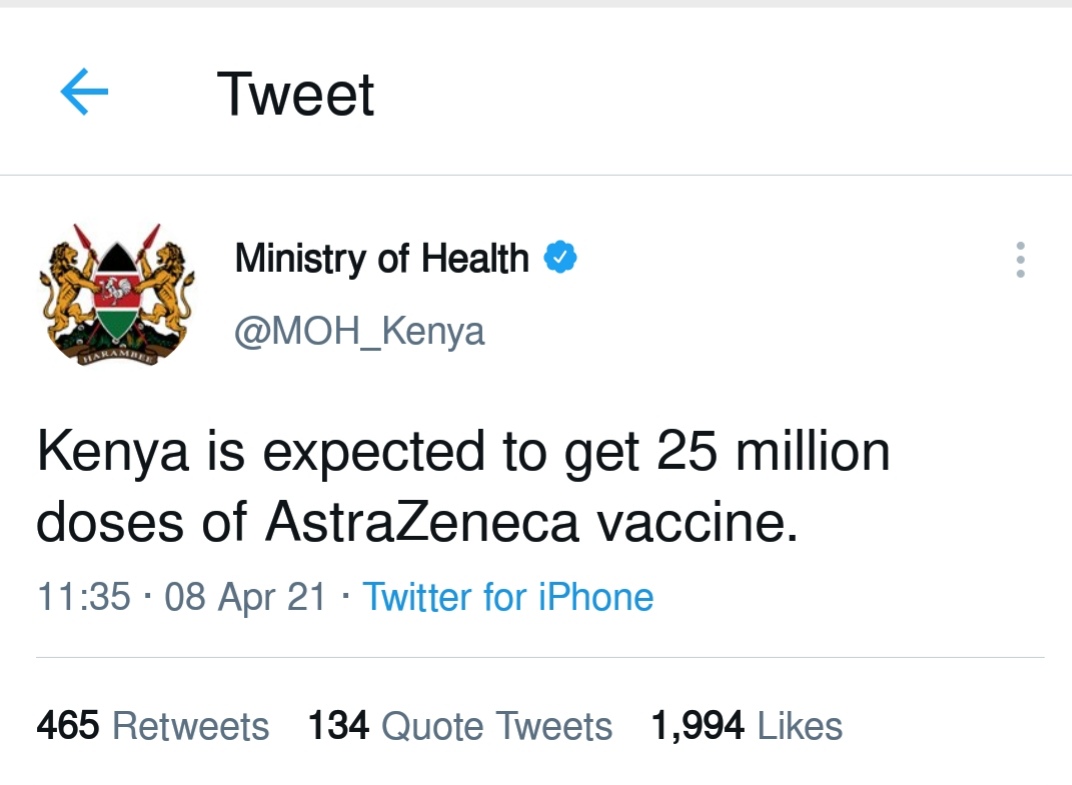 The Ministry of Health is expected to start rolling out the administration of 25 million doses of Astrazeneca Vaccine soon. Kenya began its mass vaccination on March 5 after receiving 1.2 Million doses of the Astrazeneca Vaccine. By Thursday 8th April 2021, 422,021 people had received their first shots of the vaccine with 238,522 (56.5%) being male and 183,499 (43.5%) being female. The Adverse Events Following Immunisation (AEFI) so far are 100. The vaccines administered thus far are 422,400 doses of AstraZeneca and 228 doses of Sputnik.

In a meeting held this week with the Senate Standing Committee of Health, the Ministry of Health affirmed that private entities will not be involved in the first face of procurement of the Covid-19 Vaccines in Kenya. The submissions by the Ministry indicated that the private sector will be permitted to take part in the roll-out plan of vaccines come July after the government has established a transparent and accountable system that safeguards public Health Safety at all times.

The Chief Administrative Secretary Dr. Rashid Aman, who was representing the Health CS said, “No private entity will be involved in the Government procurement of COVID-19 vaccines. Our plan is to procure these vaccines through 3 mechanisms; The COVAX Facility, through which we currently are getting the AstraZeneca vaccine; The AFRICA CDC Platform and Directly from manufacturers through bilateral agreements.”

“The National Emergency Response Committee (NERC) deliberated on the role of the private sector in the importation, distribution and administration of COVID-19 vaccines, as explained by the chair of the COVID-19 Vaccine Deployment Taskforce, following reports of irregular deployment of one of the vaccines(Sputnik V), and noted that gains made in the fight against the pandemic may be reversed by the introduction of counterfeit vaccines into the Kenyan market, putting the country at further risk of COVID-19 spread, increased morbidity and mortality,” added the CAS.

Following the suspension, the private entities involved in the importation of the Sputnik V Vaccine stand to make huge losses. In the meeting, the Ministry did not give a clear indication on whether the private entities involved in importation will be compensated for the loss. According to the Ministry of Health, 75,000 doses of the Sputnik V vaccine had been imported.

Those that had received the vaccine before the ban will nevertheless be permitted to get the vaccine once they are due for a second dose if they had been reported in the Chanjo-KE System at the time of the ban.

Earlier this week, the European Union drug regulator – the European Medicines Agency (EMA) reported that there is a “possible link” between the Astrazeneca coronavirus vaccine and a rare blood clotting disorder. The clots were however indicated to be very rare side effects. Although it was affirmed that the risk of mortality from COVID is a greater risk than that of mortality from the side effects, it was directed that the unusual blood clots with low blood platelets should be listed as very rare side effects of the vaccine.

Although the EMA issued no restrictions on the administration of the vaccine, the British drug regulators – Medicines and Healthcare Products Regulatory Agency (MHRA) have advised that healthy adults under 30 years be given other jabs. Most of the reported cases of the rare blood clotting disorder have occurred in women under 60 years. MHRA also concluded that the benefits out shadowed the risks in most age groups although presented data that showed the risks to people under 30. It however maintained that those that had received the first dose should also be offered the second.

WHO issued a statement on the same this week after reviewing data from EMA and MHRA and stated that “based on current information, a causal relationship. Specialized studies are needed to fully understand the potential relationship between vaccination and possible risk factors.”

The Oxford-AstraZeneca Researchers have also paused clinical trials of Covid-19 involving young children and teenagers pending a safety review of the two-short regimen by the MHRA.