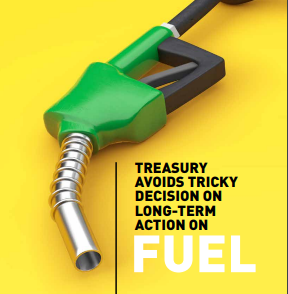 The good news from the Budget Statement was that fuel would be spared the proposed 10 per cent increase in Excise Duty that the Treasury has asked the National Assembly to impose on Kenyans when the Finance Bill is passed.

The bad news, according to some analysts, is that there is still no permanent solution to what appears set to become a long-term issue for Kenyans.

While the decision not to increase Excise Duty will be a temporary salve, policymakers still have to grapple with the question of whether the fuel subsidy is sustainable.

Treasury Cabinet Secretary Ukur Yatani has suggested it is an increasingly heavy burden requiring up to KSh15 billion per month with no sign, from the situation globally, that the price of oil in the international market is likely to reduce.

Still, the CS stated in the Budget Statement that the Government remains committed to providing adequate resources to mitigate the rising cost of fuel.

In the long term, a tough decision will have to be made.

“Folks, it is time to accept that petroleum fuels are an imported product and there are variables about its pricing that are not in the control of GoK. Junk the price control formula and the stabilization fund,” says Kwame Owino, the CEO of the Institute of Economic Affairs.

The situation over recent weeks demonstrated the seriousness of the matter as oil marketers hoarded fuel in apparent protest at the failure by the Government to pay up.

The fuel subsidy was established to cushion consumers from the haphazard increase of fuel prices by giving oil marketers a compensation. The Energy and Petroleum Regulatory Authority released a statement stating that the country had sufficient fuel stock. In the statement, the regulator blamed oil marketers for creating the perceived fuel shortage in attempts to hold the government captive for delayed payments amounting to at least Ksh 32 billion.

The countrywide situation was in dire need of redress as many aspects of daily living were affected not forgetting the already devastating high cost of living. The transport sector was heavily hit as both private and public service vehicles and passengers rely on this valuable commodity to move across different parts of the country. Public vehicles, to ensure they could continue offering transport services to passengers, resorted to carrying jerricans full of fuel which posed a health hazard. Both local and international trade was equally affected as manufacturing processes were interfered with and goods could no longer be delivered with long distance trucks stopping operations. Farmers across the country cited losses arising from challenges in ferrying their produce to the markets; the few who could had to pay double. Farming activities dependent on fuel were also brought to a halt which is detrimental to the farming calendar.

President Uhuru Kenyatta,  in efforts to address the situation, signed the release of Ksh 34.4 billion by the National Treasury. This money is to be used to pay off arrears owed to the oil marketers. Notwithstanding the President’s orders to pay off the oil marketers, the situation has not changed with fuel stations remaining intermittently supplied with fuel. The regulator maintains that there is sufficient supply of fuel in the country, reporting that Kenya Pipeline Corporation holds millions of litres of oil and has constant supply from overseas.