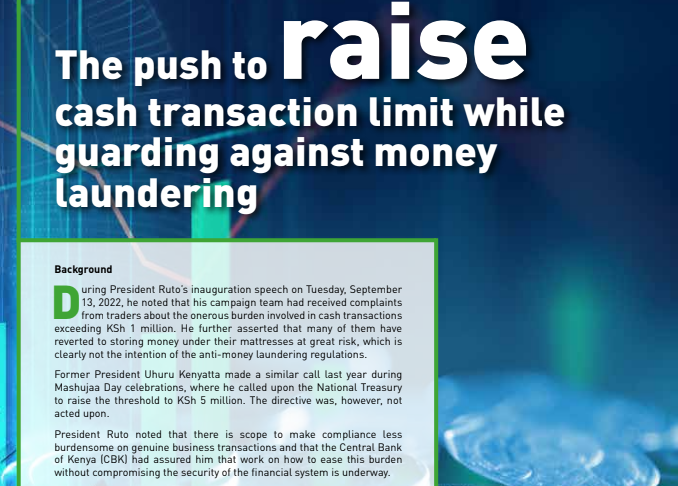 During President Ruto’s inauguration speech on Tuesday, September 13, 2022, he noted that his campaign team had received complaints from traders about the onerous burden involved in cash transactions exceeding KSh 1 million. He further asserted that many of them have reverted to storing money under their mattresses at great risk, which is clearly not the intention of the anti-money laundering regulations.

Former President Uhuru Kenyatta made a similar call last year during Mashujaa Day celebrations, where he called upon the National Treasury to raise the threshold to KSh 5 million. The directive was, however, not acted upon.

President Ruto noted that there is scope to make compliance less burdensome on genuine business transactions and that the Central Bank of Kenya (CBK) had assured him that work on how to ease this burden without compromising the security of the financial system is underway.

During the ongoing induction of elected Members of Parliament at Safari Park Hotel in Nairobi, MPs expressed interest in raising the cash transaction threshold to KES 10 million. They stated that the current threshold of KES 1 million is hurting businesses and stifling the growth of MSMEs, which largely deal in hard currency. The MPs indicated that they would push to raise the threshold.

While responding to the MPs, CBK Governor Patrick Njoroge noted that CBK is already working on a mechanism to improve reporting of large cash transactions. He, however, cautioned that the country should not reverse the gains made in fighting money laundering as much as reforms are being undertaken.

What the law says

In particular, financial institutions, also called reporting institutions, require a customer who transacts large, frequent or unusual cash deposits or withdrawals to provide a written statement confirming that the nature of his business activities normally and reasonably generates substantial amounts of cash.

It is also a requirement to consider appropriate documentation that identifies the recipient or sender and the reason for the transaction. The reporting institutions must file reports with the Financial Reporting Centre on all cash transactions equivalent to or exceeding USD 10,000 (approx. KSh 1.2 million).

Objectives of the cash transaction limit

In Kenya, there have been instances where proceeds of corruption and ‘wash wash’ have been laundered through the financial system.

The term “wash wash” refers to con artists’ tricks to get money from their victims by convincing them that fake bank-sized notes are real currency, only that a dye has stained them. The victims are convinced to buy chemicals to remove the dye and are promised a cut of the clean money.

Often, this money is channelled through the banking system to appear as if it is from a legitimate business, mostly through cash-based service industries such as car yards, salons, or bars and restaurants.

The main aim of the cash transaction limit rule is to allow authorities to track illicit financial flows that have been blamed for illegal activities such as money laundering and terrorism.

Kenya is a member of the Eastern and Southern Africa Anti-Money Laundering Group (ESAAMLG), an associate member of the Financial Action Taskforce (FATF). FATF aims to develop and promote national and international policies to combat money laundering and terrorist financing.

Over 200 jurisdictions worldwide have committed to the FATF Recommendations, which, among others, require financial institutions to undertake customer due diligence (CDD) measures on transactions above the designated threshold of USD 15,000 (approx. KSh 1.8 million).

The FATF Recommendations are widely considered the global standard for Anti-Money Laundering (AML) and Combating Financing of Terrorism (CFT).

The current limit has faced criticism, particularly from MSMEs. The core argument is that the limit has made bank transactions more tedious and lengthier, forcing businesses that handle large sums of money to keep it, thus restricting cash flow in the economy.

Raising the threshold will require an amendment of the regulations that set the cash limit at USD 10,000. It is anticipated that the Cabinet Secretary for National Treasury, once appointed, will move to amend the rules and table the same for approval in Parliament.

An amendment to raise the cash limit to KSh 10 million will, however, be contrary to the threshold recommended by FATF, which is currently set at USD 15,000 (approx. KSh 1.8 million). As such, it is expected that the government will need to engage critical stakeholders in the industry, including FATF, to consider Kenya’s circumstances as it seeks to raise the threshold.