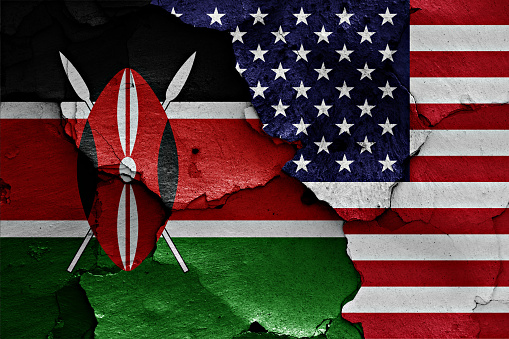 Kenya and the United States of America (USA) formally launched negotiations on 8th July 2020 to seal a Free Trade Agreement (FTA). This follows the notification by the United States Trade Representative (USTR) Robert Lighthizer made to Congress on March 2020, at the direction of President Donald J. Trump, that the Trump Administration will negotiate a free trade agreement (FTA) with Kenya.

This was informed by the U.S.-Kenya Trade and Investment Working Group established by President Trump and President Kenyatta in August 2018, which was tasked with laying the groundwork for a stronger bilateral trade relationship.

It is expected that this deal will form a model for other African countries upon the expiry of the African Growth and Opportunities Act (AGOA) in 2025.

In addition to this, the negotiations are taking place at a time when the rest of Africa is calling for more regional integration through intra-regional trade, with the establishment of the African Continental Free Trade Area (AfCFTA) which is set to commence in early 2021. The AfCFTA targets to increase Intra-Africa trade to 50% from the current 15% and is poised to be a better framework for Kenya owing to the fact that negotiations with the U.S. will be between extremely unequal parties.

In view of the foregoing, it is important that we consider the background and what has informed this decision.

First, the numbers. According to the Kenya Private Sector Alliance (KEPSA), total exports to the US from Kenya in 2019 were valued at $667million where nearly 70% ($453.73 million) were apparel items. Other goods exported included edible fruit & nuts (cocoa, brazil, cashew) (valued at $74 million); coffee, tea & spice (coffee) ($50 million); and special other (returns) ($55 million). This made Kenya the number one apparel exporter in Sub-Saharan Africa to the US which is the largest apparel market globally with a market value of $343 billion.

Although Kenya may not feature as one of the top ten importers for the US market, the textile and apparel industry has the potential to alleviate the unemployment crisis in the country.

According to a 2018 study by the Kenya Association of Manufacturers (KAM) and the Kenya Business Guide, EPZ based manufacturers employ 52,000 people. The local sector directly employs about 21,000 people in formal sector and over 30,000 informally. The two sub sectors cumulatively employ over 200,000 indirectly.  Further, 40,000 cotton farmers are currently engaged.

Secondly, there was the option of jointly negotiating for an extension of AGOA terms with other African countries. However, whereas AGOA gives 39 sub-Saharan African countries duty-free access to the American market, since coming into effect, more sub-Saharan exports have headed to the EU, China and India than to America.

Moreover, as noted by the CEO of KEPSA, Mrs. Carole Karuga, while negotiating as a bloc has a host of advantages, it also has its own complexities and disadvantages.  For instance, while the EAC agreed to push for changes to the AGOA agreement in 2015, a number of EAC states- Rwanda, Tanzania and Uganda- employed tactics to delay the US talks.

Another case in point is when some EAC member states were unwilling to first sign the Economic Partnership Agreement (EPA) with the EU. Kenya signed and ratified the EPA, which guarantees duty-free and quota-free access of EAC products to the EU market in October 2016, after nine years of negotiations.

As a result of the delay, Kenyan horticulture, which accounts for about 20 per cent of the country’s exports to the European market, was the hardest hit by the delay in signing the EPA.

Whereas these arguments provide a clear justification as to why Kenya would want to go it alone, the concerns raised by stakeholders cannot be ignored.

As mentioned earlier, the most obvious concern is the great inequality in negotiating power between Kenya and the U.S.

There is a complete mismatch. For example, California alone is the fifth largest economy in the world. Kenya on the other hand is currently ranked 98th on the US trading partners list with exports of $365 million and imports worth $644 million.

Moreover, as a result of the agreement, Kenya runs the risk of crippling her agricultural and manufacturing sectors while disintegrating the economy. According to a lobby group largely made up of civil society organizations (such as Biodiversity and Biosafety Association of Kenya, CRAWN Trust Kenya, Building Eastern Africa Community Network (BEACON, SEATINI Uganda, Tax Justice Network Africa; among others) owing to America’s prioritization and capacity to secure comprehensive market access for U.S. agricultural goods, promote greater regulatory compatibility with U.S. rules and establish specific commitments for trade in products developed through agricultural biotechnology this is likely to contribute to food insecurity, as the ability of local farmers to produce will be limited by stiff competition from subsidized products from the U.S. market. Further, it may limit the ability of the Kenyan government to regulate risky pesticides or agricultural technologies or even shelter local production from volatile prices or supplies.

Further, as earlier pointed out, there are concerns with regards to the knock-off effect on regional integration. It is feared that Kenya’s negotiation with the U.S. will render her commitments to regional trade meaningless.

Comprehensive trade deals of the size envisioned by the U.S. are not easy to pull off. The U.S. will undoubtedly be the more dominant player in a Kenya-U.S. FTA negotiation. Indeed, experts agree that few countries come close to negotiating on parity with Washington. For both sides, it will undoubtedly be a long path to negotiations. Consequently, it is important that the Kenyan Government is fully briefed on:

Much of the information herein provided has been collated from Econews, Kenya Private Sector Alliance (KEPSA) and the Office of the United States Trade Representative (USTR).