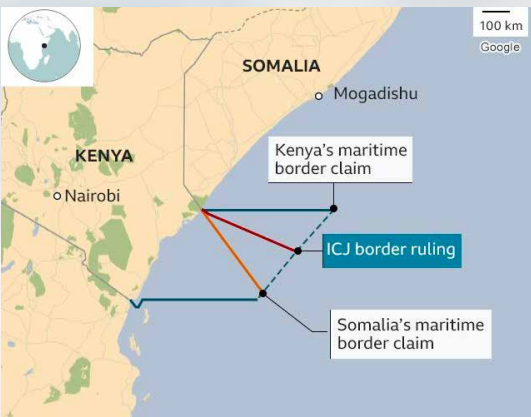 This week, the International Court of Justice( ICJ)  ruled on the maritime dispute between Kenya and Somalia . The bone of contention was in which direction each of the country’s borders extends into the Indian Ocean.

Somalia said the boundary should run in the same direction as the southeasterly path of its land border, while Kenya on the other hand  argued that the border should take roughly a 45-degree turn at the shoreline and run in a latitudinal line.

The area in dispute is said to be rich in oil and gas.

ICJ Chief Judge Joan Donoghue in her ruling on Tuesday, October 12, stated that there was  “no agreed maritime boundary” and drew a new border close to the one claimed by Somalia, although Kenya kept a part of the 100,000 square-kilometre (39,000-square-mile)

However, Kenya refused to recognise the ICJ’s jurisdiction.

In a statement, President Uhuru Kenyatta said the ruling would “strain the relations between the two countries”.

After years of contention over the waters, in  2009  both nations agreed in a memorandum of understanding, backed by the UN, to settle the boundary dispute through negotiation.

However,  in 2015, Somalia said  the talks had failed and proceeded to the  ICJ instead for further direction on the matter, leading to the ruling this week .

The dispute has not only strained diplomatic relations between the two countries, but trade relations as well.

The income from sale of goods to Somalia was the lowest since 2009 when they stood at KSh 11.22 billion.

Miraa traders have been taking the biggest hit as Mogadishu has been their primary market for years. However,  business has not been the same thanks to low production and the  long-standing maritime territorial dispute.

Kenya and Somali have been enjoying long-standing economic and trade relations. Data from trade data analysts OEC indicates that In 2019, Kenya exported $116 million to Somalia. The main products were rolled tobacco ($41.2 million), other vegetable products ($13 million), and tea ($5.71 million).

During the same period, Somalia exported $4.32 million to Kenya. The main products exported  were prefabricated building materials ($3.44 million), other electrical machinery ($210,000), and other cast iron products ($210,000).

Apart from economic and trade relations, players in the maritime sector are also on the lookout for development. Part of the contented area is still within the global maritime routes to access East and Southern African ports. However, the port authority says there is no cause for alarm yet as long as there are no incidents of insecurity around the area.

Kenya recently opened the Port of Lamu for business,, while making continuous  expansions at the Port of Mombasa. Sources at the port state that the contention between Kenya and Somalia will not affect shipping routes yet as long as there is security around the area

This comes as Kenyan waters were re-designated from the High Risk Area (HRA) by the global shipping industry earlier in September.

Fishermen in Lamu county also protested against the ICJ ruling, stating that their livelihoods were on the line. Despite Kenya insisting that the area is within its borders, the fishermen have now been caught in between as both countries claim the area.

“For years now, we have been risking our lives to fish here because all countries claim the waters, but we are risking a lot getting into the waters. Now that we are told it belongs to Somalia we are stuck since this was our source of livelihood,” says Adballa, a fisherman in Lamu.

The court’s ruling on the maritime dispute has been received with mixed reactions from both countries. Though binding, the court has no enforcement powers and countries have been known to ignore its verdicts.  For now, the world is watching the next steps the countries will take as far as their diplomatic relations are concerned and whether it will get any better.