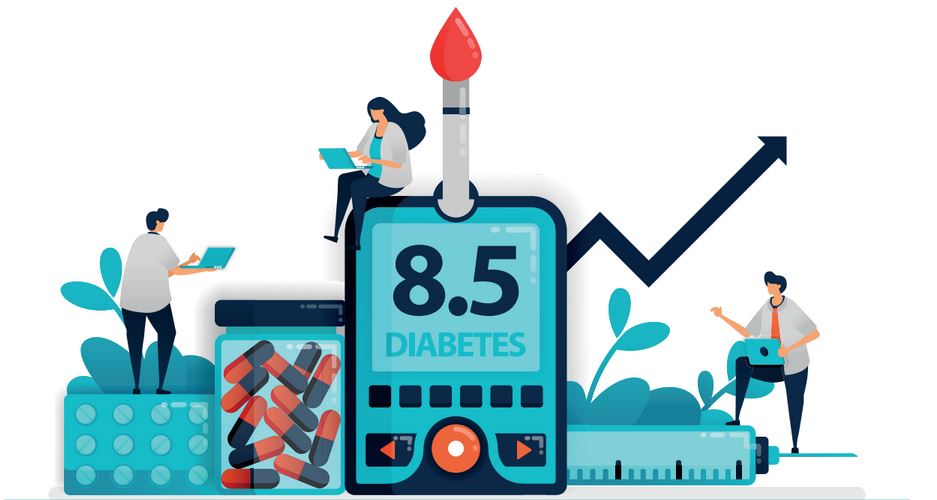 Communicable diseases such as the COVID-19 have doubled the burden on fragile and overstretched healthcare systems in low to lower-middle income countries such as Kenya.

According to statistics from the Kenya National Strategy for the Prevention and Control of the Non-Communicable Diseases almost half of all hospital admissions and about 55% of deaths in Kenya are associated with non-communicable diseases such as diabetes or hypertension that are now commonplace.

The interlinkage between communicable and non-communicable diseases has never been more apparent than now as a result of the Corona virus. As countries established strategies to reduce, manage and prevent new infections, such as social distancing or isolation, prioritization of care for non-communicable diseases has suffered. As a result of the disrupted supply chains globally owing to the pandemic, whereas there were exceptions for medical supplies, in many health institutions especially those in rural areas experienced a lag in receiving medications that treat other ailments notably, non-communicable diseases (NCDs). For instance, there have been reports of health clinics receiving late deliveries or limited supplies of septrin (cotrimoxazole) an antibiotic needed by people with low CD4 count as a result of HIV.

Even before the onset of COVID-19, access to chronic care especially for NCDs, was challenging more so among the low income households. This is partially as a result of high direct and indirect costs limiting accessibility and fragmented health care systems.

Per the Kenya Health Financing System Assessment of 2018 whereas Government budgetary spending on health (both national and county) has increased in absolute terms from before to after devolution, it has stagnated as a percentage of total approved government budgets. Health as a percentage of the government budget has remained below the 15 percent target set by Africa heads of states in Abuja in 2000, of which Kenya is signatory. As an average for the period between 2010 and 2015, the Kenya government general health expenditure of 1.78 percent, as a percentage of GDP, was third lowest in a peer group of sub-Saharan African countries (World Bank, 2010–2016). However, such international comparison as indicative of actual public sector commitment to health must be interpreted with caution, as many of the countries that have returned impressive rates receive large amounts of on-budget donor funding which is considered as part of government spending. The net effect is to inflate the role of government in financing health.

However, notably, during the Covid-19 pandemic despite the contractions in the overall economy, the Government has increased the health budget by 10.4% to Kes. 114 Billion compared to the 2019/2020 second supplementary estimates. However, the allocation is less by Kes. 1.59 Billion with the pre-coronavirus health budget which stood at Kes. 115.6 Billion in the 2019/2020 first supplementary budget in December 2019.

Following the confirmation of the first coronavirus case in March 2020, the government prepared in April, a second supplementary budget for the 2019/20 fiscal year to facilitate response to the pandemic. Surprisingly, the health budget was reduced by KES 12 billion (10.6%) in the second supplementary budget compared with the 2019/20 first supplementary budget. However, this reduction has been offset albeit not fully by the KES 10.6 billion increase in the 2020/21 estimates. This means that while health needs are likely to escalate in 2020/21 due to coronavirus pandemic, the Ministry of Health will have a slightly smaller budget (by KES 1.59 billion) compared with the allocation it had before the pandemic i.e. at the time of the first supplementary budget in December 2019.

Like many other lower‐middle‐income countries whose health financing depends in part on international donors, out‐of‐pocket payments remain one of the only ways to pay for care for non‐priority diseases like diabetes that require consistent self‐care making it inaccessible to a large proportion of patients. According to research published in October, 2019 on the Patient costs of diabetes mellitus care in public health care facilities in Kenya average direct annual patient cost was estimated at Kes. 53,907 while overall indirect cost (such as food and transport) is estimated at Kes. 23,174. Patients reporting hypertension comorbidity incurred higher costs compared with diabetes-only patients.
Further, according to the same report, external funding from donor governments and multilateral organizations has been an important resource for health financing in sub-Saharan Africa, particularly for specific, priority interventions and disease areas, including HIV, tuberculosis, malaria, and reproductive health. From 2002 to 2010, external funds for health increased each year, especially in the second half of the decade, reflecting the scale-up of large global health initiatives like the Global Fund and the U.S. President’s Emergency Plan for AIDS Relief (PEPFAR).

However, since the beginning of the current decade, this rapid growth in external resources for health has been on a steady decline. In Kenya, external resources are declining as a percentage of the Total Health Expenditure (THE), but they continue to play a significant role in financing healthcare. In 2009/10, external funds from development partners accounted for 32 percent of THE. By 2015/16, this had declined by 10 percentage points to 22 percent of THE. As a percentage of GDP, development partners’ funding for health declined from 1.8 percent to 1.1 percent.
Further, during this period, the shares of HIV, tuberculosis, and malaria programming funded by external sources all fell between 2012/13 and 2015/16, from 72 percent, 37 percent, and 39 percent to 62 percent, 28 percent, and 27 percent, respectively.

However, NCDs were the only health area to be more heavily externally funded than in 2013, increasing slightly from 17.1 percent to 19.5 percent of total resources. This is reflective of increasing attention to NCDs among donor governments and multilateral organizations as the disease burden in low- and middle income countries grows.
Overall, external funding had also fallen in absolute terms since 2012/14, from KSh 64.1 billion to KSh 53.2 billion in 2015/16 according to Ministry of Health reports of 2017.

Impressively, over the same period, the government’s contribution to THE increased from 27 to 34 percent, surpassing external funds as a share of THE. Unfortunately, evidenced by cursory research on government spending in health, it continues to be limited in comparison to the existing health crisis and the expanding needs in view of the reducing donor funds.

Key concerns and opportunities:
Domestic resource mobilization: A significant share of external spending on health is off-budget, which can pose challenges to domestic strategic planning for health. In 2009/10, 83 percent of donor funding was off-budget, equivalent to 27 percent of total health expenditure. The share of off-budget resources declined but remains the bulk of external funding; 73 percent of external funds were off-budget in 2015/16. Off-budget support is mainly earmarked as project support specific to disease or intervention and is channeled through nongovernmental organizations (NGOs). These resources play an important role in financing healthcare but are not captured in government budgets and may not necessarily align with country or county health priorities. Domestic resource mobilization is therefore critical to reducing the burden of OOP expenditure and closing the gaps left by declining donor funds. Further, even though off-budget support remains high, it is declining as a proportion of overall external resources. This offers the opportunity for increased government ownership and better coordination across domestic and external funders.

Local pharmaceutical manufacturing: Current purchasing preferences of Kenya Medical Supplies Authority (KEMSA) and Mission for Essential Drugs and Supplies (MEDS) do not necessarily encourage growth in local pharmaceutical manufacturing, and they result in lower-quality drugs being pushed to lower-income rural markets. KEMSA and MEDS, both significantly reliant on donor funding to procure drugs, are often required to purchase from WHO-certified manufacturers. Per a 2017 report published by the Ministry of Health of the 34 local manufacturers in Kenya, only one has successfully received WHO certification for Good Manufacturing Practices (Marcopolis, 2016). This position could have since changed- but not dramatically. Thus, most local manufacturers are excluded from KEMSA and MEDS procurement, and they operate only within the fragmented private market, where it is costly to market and distribute the drugs. Indeed, local manufacturers enjoy only 28 percent of the total share of pharmaceutical revenues (UNIDO, 2010). While penetration of low-quality drugs can be a problem throughout public and private sectors (Wafula et al., 2016), the highly fragmented retail sector has a higher risk of being flooded by cheaper and lower-quality drugs. The rural markets are often served by informal pharmaceutical retailers with several layers of middlemen along the way; as price is the primary competitive factor, this poorer, rural segment of the population is disproportionately at risk of accessing lower-quality drugs.

As external funding for health declines, Kenya will also face the challenge of integrating donor-financed vertical programs into domestically financed schemes. The contribution of external resources to total health expenditure is still considerable. Kenya has not yet reached the point where it can transition entirely from external support, yet external resources are declining and will only continue to do so as the country matures as a middle-income economy. The government should begin planning for greater transition now, with integration of vertical programs into devolved service delivery and financing, with a role for NHIF as the future dominant purchaser. Integrating HIV, TB, and other vertical program interventions into NHIF requires that its risk pool be significantly large and diverse, that it cover the related populations at risk, and that the scheme establishes the provider linkages and purchasing models necessary to deliver the related care and to remain financially viable. Linkage with NHIF, however, can ultimately help ensure sustainable financing for these services as external resources decline. Previous cost and financial assessments of integration of vertical programs have not moved past the analysis stage. The Kenya Health Financing Strategy proposes financing most aspects of these vertical programs through national and county government budgets.

Currently, the national government plays a central role in these vertical programs; it will continue to procure and distribute key commodities. National allocations to health will have to increase in order to ensure these functions continue with the diminution of external resources. County governments will also have to ensure adequate resources for financing and strengthening service delivery through public facilities, and also increasingly contracting community organizations

Acknowledgement:
Much of the research and data provided in this article is attributed to: