Cost of farm inputs: Looking for a sustainable approach beyond subsiding fertiliser 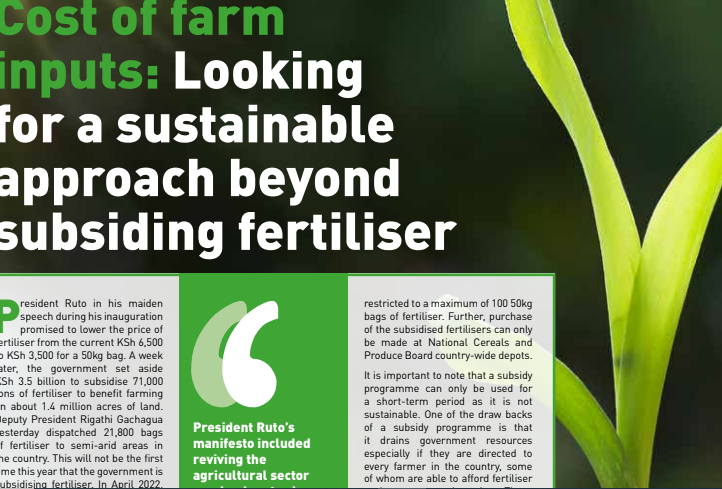 President Ruto in his maiden speech during his inauguration promised to lower the price of fertiliser from the current KSh 6,500 to KSh 3,500 for a 50kg bag. A week later, the government set aside KSh 3.5 billion to subsidise 71,000 tons of fertiliser to benefit farming on about 1.4 million acres of land. Deputy President Rigathi Gachagua yesterday dispatched 21,800 bags of fertiliser to semi-arid areas in the country. This will not be the first time this year that the government is subsidising fertiliser. In April 2022, the Ministry of Agriculture released KSh 5.7 billion subsidising 114,000 tons of fertiliser. This was later in June supplemented by an additional KSh7.3 billion subsidy from the African Development Bank (AfDB).

President Ruto’s manifesto included reviving the agricultural sector as a lead sector in the quick recovery of the economy through the reduction of input costs such as fertiliser and seeds that lead to increased food production costs. An increase in maize production as in this context will reduce maize imports, which Kenya heavily relies on. The government had early in the year issued a directive exempting imported maize from tax in efforts to curb low supply of maize that had led to increased prices of maize flour. Further, declined maize production caused by dry weather conditions and high input costs led to the high maize flour prices which hit consumers’ pocketbooks. The duty-free maize import directive was later extended to September 30.

A subsidy can take different forms, in this context, it is in the form of financial support by the government which helps reduce cost of inputs and subsequently lower maize flour prices. Other than lowering food prices, President Ruto aims at reducing the cost of living which is highly associated with high cost of input production. Early in the year, the price of a 2kg packet of maize flour shot up to over Sh 200 which led to the need by the government to roll out of the maize flour subsidy.

The current fertiliser subsidy programme has conditions imposed to ensure its effective management. For instance, individual farmers are restricted to a maximum of 100 50kg bags of fertiliser. Further, purchase of the subsidised fertilisers can only be made at National Cereals and Produce Board country-wide depots.

It is important to note that a subsidy programme can only be used for a short-term period as it is not sustainable. One of the draw backs of a subsidy programme is that it drains government resources especially if they are directed to every farmer in the country, some of whom are able to afford fertiliser at the current market prices. These resources could be diverted in other government projects. Additionally, subsidies are marker disruptors as they interfere with market imperfections by disrupting market prices. International trade will also be disrupted as most subsidies lead to restricted imports which negates Kenya’s statement by President Ruto during UNGA on the need for international partnership and cooperation to avert economic crisis in the wake of the pandemic.

Without the subsidy, fertilizer prices will not be affordable to some farmers who will opt not to use fertiliser leading to poor yields. Low food production in the diminishing land resources has a ripple effect on the economy, for instance, farmers will not be able to settle loans obtained for their agribusiness and further lead to food insecurity.

Solution to the fertiliser issue

It goes without saying that fertilisers are crucial inputs for quality food production and revival of the economy. However, there is need for a long-term solution to the issue of high-priced fertilisers. Kenya imports all its fertiliser as such there is need for friendly tariffs and removal of trade barriers at the borders.

In addition, some of the fertilisers used by farmers lack the required crop nutrients leading to low investment returns. Creating the need of capacity building in terms of soil health and harmonisation of fertiliser standards by the proposed fertiliser platform that will facilitate timely resolution of emerging issues on soil management. The platform will also oversee investment in soil management by the government that requires quality laboratory services and implementation of the National Agricultural Soil Management Policy. Farmers can also be trained on the correct type of fertilisers and their usage depending on soil composition. Additionally, there is need for introduction of locally blended fertilisers with liming which can greatly improve crop yields as such calling for locally manufactured fertilisers to reduce dependency on imported fertiliser.

Lastly and most importantly is the need to redesign subsidy models to avoid dependency on them and prevent further market disruptions. A redesigned subsidy programme should cater for only a few selected beneficiaries like farmers in drought stricken areas or areas with little rainfall. This way the government is able to spend less on subsidies. Further, the government needs to ensure effective use of subsidised fertilisers so as to prevent diversion into repackaging and resale of the same which lead to adulteration and contamination. This can be achieved through purchase restriction by private dealers and farmers.