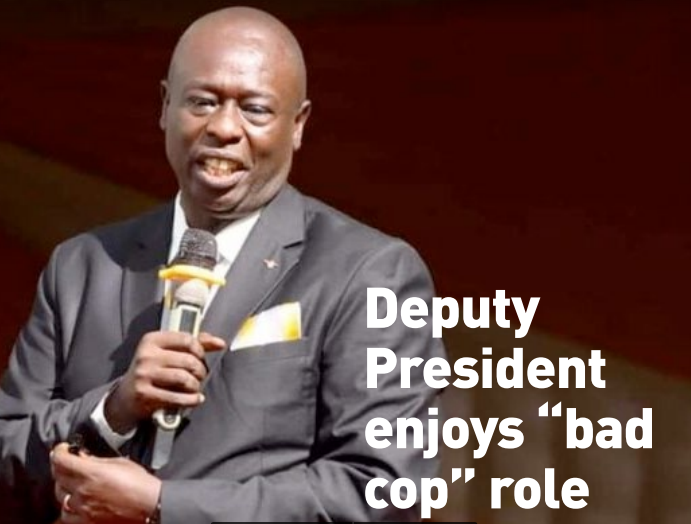 If they were two policemen on the beat, President William Ruto would be the quiet
authoritative officer while Deputy President Rigathi Gachagua would be the
aggressive “bad cop”.

That awareness was apparent in Mr Gachagua’s criticism of the business sector at a
meeting of the Kenya National Chamber of Commerce and Industry (KNCCI) in
Nairobi on Thursday morning.

With a bemused look, Mr Gachagua loudly wondered whether Raila Odinga would
have made it for the meeting, which started at 8am, had he been the President. His
remarks appeared to have been aimed at Richard Ngatia, the KNCCI president, who
was in Jubilee and had dropped out of the race for the Jubilee ticket for Nairobi
governor.

Mr Gachagua has been criticised for appearing to dwell too much on the past but he
also understands the importance in politics of reminding your rivals of their past
misdeeds.

While the statement he made may be in jest, it would also be important to remember
that he has in the past stated that those who did not support their bid should not
expect the Government to respond whenever they call.

The Deputy President has also taken on the role of mobilising funds to help alleviate
the effects of prolonged droughts in majority of the counties. The call for support for
the government’s efforts has featured in meetings with the Business Member
Organisations and is likely to persist as the situation has not improved much.

The drought has been among the first challenges the Kenya Kwanza administration
has faced.

Police narrative bites back at action on DCI. Two weeks ago, a young man died of stab wounds inflicted by robbers in the fairly upmarket neighbourhood of Ridgeways off Kiambu Road.

The neighbourhood was shocked as it once enjoyed the security provided by having a
police post around the corner in addition to those who used to guard the home of
John Michuki when he was the Minister for Internal Security.

It turned out that the stabbing by young men bent on grabbing a phone was not an
isolated incident in Nairobi.

The narrative that has emerged from this wave of crime, although not new, is that the
police have relaxed on stopping crime because of the pressure the Directorate of
Criminal Investigations has come under since a special unit was disbanded. The
reaction of the police had been predicted, especially since it emerged that the former
DCI boss, George Kinoti, was the target of investigations.

Notably, the focus of press reports appears to have shifted away from the matter since the allegation that
the officers arrested over the disappearance of two Indian nationals were being pressured to implicate Mr Kinoti.

It is too early to tell whether this marks the beginning of the end of the crackdown on
the crack unit, but it still remains a matter worth watching.